You are here: Home / Communities for Artists / You Won’t Believe How Many People Buy Art via Mobile Apps

From Cory: Freddy Grant at Bluethumb gallery caught my eye when they reached out to let me know about the study from TEFAF that mentioned that only 6% of all fine art sales happen online – but that number was up nearly double the year before. I asked them to write an article about their experience as an online-only gallery, and to highlight the fact that more than 20% of their sales come from smartphone orders.

The way people buy art is changing. TEFAF’s annual Art Market Report shows that we now trust e-commerce to make bigger purchases. Globally, online art sales have increased from €2.5bn to €3.3bn in the last year growing their total share of the market by 1%, with the majority of sales being made in the middle-market range of $1,000 – $50,000 (US).

In the first quarter of 2015, Bluethumb, one of Australia’s leading original art sites and the company I work for, saw sales rise by 78% year-on-year. This success is partly due to art buyers feeling increasingly confident to buy direct from artists through online platforms. We also attribute this rise in sales to using innovative technology such as our iPhone and Android apps. 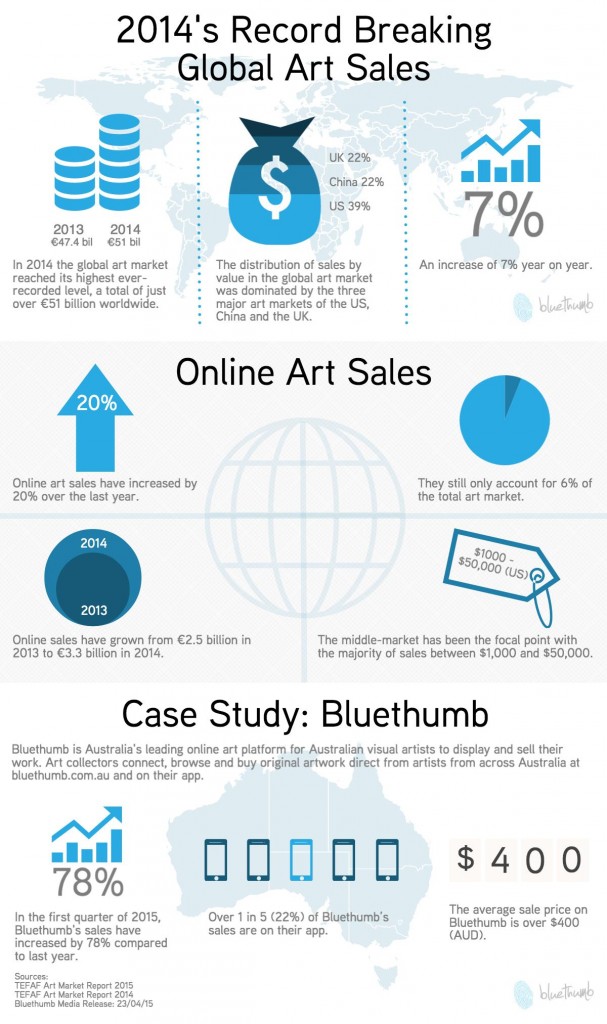 In 2013, the trend of people spending more time on mobile devices than on laptops or PCs made our directors see opportunity. “It was a natural step”, explains Bluethumb director George Hartley. “Technology and innovation has always been part of the Bluethumb ethos. We knew if we did something no other art gallery was doing, it would make an impact.

However, the investment in creating the first version of the app was a gamble. “We simply didn’t know what the uptake would be given the cost to create it. Once the app was developed we also invested lots of time pre-launch with the creation of a promotional video as well as images for our app and app store optimization.”

We released our art iPhone app, Bluethumb – artunearthed, in November 2013. In software development terms it was very much a ‘minimum viable product’. It was missing some pretty key things. But what we had in there worked.

As a small art startup with no direct channels to Apple, the last thing we expected to see 4 weeks later was this: 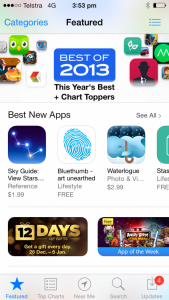 Why did Apple feature it? Our guess is as good as yours, but we like to think because it’s an original idea, executed well.

Now, over 22% of Bluethumb’s sales are through the app. Remarkable considering the average sale price is over $400 (AUD). The key to the app’s success is the native experience it gives users. Unlike often-clunky mobile sites, or worse still unresponsive sites designed for your PC screen, the app gives users a superior experience with quicker load times, artwork that fits the screen perfectly and easier checkout.

Here’s why these things matter:

From Cory: One of the things I love here is that this gallery is acting like an modern ecommerce company. Many galleries are focused primarily on “relationship building,” which usually means throwing parties and making rich people feel special. While that’s a viable tactic, most galleries fail to learn modern marketing practices. This kind of thinking – about time on site, clicks to checkout, and personalization with data – is normal for most modern ecommerce sites. If your gallery isn’t doing this, they might be leaving a lot of money behind.

Importantly, our app isn’t just a responsive online shop. Its primary function is an art gallery on the go. All through the day, new art is uploaded by the 1200+ artists using Bluethumb meaning there is always something fresh on the home screen. Users can ‘heart’ their favorite pieces, which curates their own collection of artworks on their favorites page.

It’s not only buyers who enjoy using the app; we’ve had a great response from artists who use the app too. It allows them to have a portfolio of their work wherever they are and on whatever screen is available. Bluethumb artist, Annette Spinks, also loves to check out other artists’ work for inspiration. ”It’s great to browse when I have a bit of down time to see what other artists have been working on.”

Annette has turned her passion into a decent living by embracing the digital revolution. “Because of my online sales, I have been able to set up my own studio and gallery and work as a full-time artist.” Annette sells her art through her own site and Bluethumb. “Bluethumb has given me national exposure and the opportunity to sell my art all over Australia.”

It is no coincidence that she is one of our best selling artists; she puts in the work and it pays off. Her advice to other artists is diversify. “Look at different ways to promote your art. I sell my art through my own online gallery, my art studio and gallery in Inverloch, through bluethumb’s online gallery, social media and I’m represented by two galleries. I set time aside each week for promotion… although I would much rather be painting in the studio!”

Sue Bannister is currently the top seller on Bluethumb. Her semi-abstract style is bright, bold and stretches the boundaries with colour and light. Sue used to own galleries and exhibit extensively but now loves the freedom online art sales has given her. “I do still exhibit but mostly sell online now”, she explains. “I had two small galleries in the past and found them time consuming – I am now freed up from that responsibility and can concentrate more on my painting.”

This freedom allows Sue to spend more time where she feels most inspired – her home and studio just over an hours drive from Sydney. “We have a beautiful view off Kincumba Mountain, with no neighbours other than all the native birds & wallabies. We are on 3 acres that backs onto a huge rainforest reserve so it’s like we have hundreds of acres.”

In 2014 The Bluethumb – art unearthed app was awarded Best Shopping App in the Australian Mobile & App Design Awards. The awards are the biggest app design awards in Australia. To put this in context, the previous year’s winner was Starbucks! We are thrilled that we are getting the recognition we’ve worked so hard for.

We are now in the process of updating the Bluethumb iPhone app, which is due to be released over the coming months. A lot has changed in design and user experience since the launch of the initial app. Watch this space to see how we’ve responded to keep at the forefront of innovation in the arts market.

From Cory: This isn’t the first time we’ve written about mobile app sales for art. You’ll want to check out this interview we did with the founders of Vango.

Freddy Grant is the Marketing Coordinator at BlueThumb Gallery.