Nuno Teixeira is a comic book artist, game designer, and web media specialist.  His bio includes undergraduate work at art school, working at a company that transferred classic art to digital media, and finding himself in all sorts of trouble all over the internet.  Check out his blog at NunoXEI.com 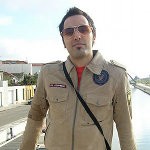 What was the name of the place where you started doing digital transfers?  You said it was a dream job for an artist, but did it ever get monotonous or cause you to feel creatively stifled?  If not, what was it about the job that fulfilled your creativity?

The company was called Synthescape Inc.. The projects I was a part of were recipients of government grants from Canada’s Digital Collection (CDC) and Virtual Museums Canada (VMC). One of the jobs included scanning artist slides then polishing the images–some of these slides were 15-20 years old, so I’d have to color correct, remove fibers and bubbles, stuff like that. I designed the website that collected 20 works of 40 Canadian artists. For some works like pottery and sculptures, we’d photograph it with a special camera that took multiple photos from multiple angles, then an application would stitch the sequence together and create an interactive three-dimensional object.
It did get a bit monotonous at times; this was back in the early 2000s, when computers weren’t really built for the kinds of processing we were doing.  As an artist who at the time had just finished a college degree in web/graphic design it was a chance to feel like both my educations actually provided benefits to the job I was in–which unfortunately was not the case for many, many of my artist colleagues at that time.
Ultimately, this experience has influenced and taken me to the place I am today. I fell in love with what the web could offer,

how it could provide a tool to communicate ideas and showcase creativity, capture an audience, create or be a part of a community, etc. I’m currently re-aligning my direction as an artist because the web has created other opportunities for me to tap into and express myself. I learned that as an artist, sometimes you have to adapt and go against your comfort zone. Once you do, as painful and sluggish as it is, hopefully you come out of the experience with something positive that will help guide other future decisions.

What are your current favorite comics?
My favorite comics in the broad sense are the comics that stray from being the typical comic. As much as I like a good superhero story, I have a strong affinity for the more “high concept” stuff. The number one example is Neil Gaiman’s Sandman of course. The layers of story telling and narrative, concept and philosophy, symbolism and visuals are all things that speak to me on more levels then just the purely “for entertainment” ones. Many of the British writers are doing independent properties that are more likely to grab my attention. John Constantine Hellblazer and Swamp Thing nearly single handedly gave me names of writers I’d seek out.
Grant Morrison’s run on X-Men actually got me back into comics after being away from it for a decade. I’m probably in a minority as many X-Fans blame him for “ruining” many things–but that’s where I’m different I guess, and why I don’t have such a connection with the Big Two books of characters with 50 year continuity issues that NEVER change or develop. I saw Morrison completely shift a series I was collecting when I dropped comics in 1994, so to me I thought the whole industry had changed. It hadn’t–but I was back in in any case.
One of the reasons I still read Batman graphic novels, when I still never collected or read them again, was because many Batman trades did their own thing. They told stories within their own continuity. The had a beginning, middle, and end. I’m currently digging back bins everywhere for Legends of the Dark Knight single issues because of the fact that each 3-5 issues contained a stand alone story.
As for the current stuff, I’m currently digging stuff out in space by Marvel and DC–Dan Abnett and Andy Lanning’s War of Kings, Nova and Guardians of the Galaxy for Marvel, Geoff John’s Green Lantern and Green Lantern Corps for DC. It seems the fact that they are in space has allowed them to exist outside all that convoluted continuity I get frustrated with and focus on just delivery interesting, fun, and comprehensive stories. For the indie books side, I’m digging Mike Carey’s The Unwritten as it deals with a very robust form of story telling similar in ways to the internet-generation consumption of information. Mark Waid’s Irredeemable deconstructs a Superman-like character and has him crack due to public pressure and his feeling that he’s underappreciated and how that affects a being of his power.
What is your ‘day job,’ or complimentary career?  Give a few details about your day to day activities.  You mentioned that you are in the technical field, you build relationships & make videos.  Can you be succinct as to how you make your money?
I’m the assistant editor and content manager of TheServerSide.com, a website of many owned by TechTarget. I basically manage content on the site including managing the site’s framework and design element requirements. I put together a weekly newsletter for 200+ registered members and work with advertising and marketing to make sure all aspects and deliverables are in place for clients. Most of my work is directly tied to the framework of the site which is built with J2EE wrapped in the Tapestry Framework but uses a couple other builds and layers that were added throughout the years. Thankfully my worth right now with the company is that I’m the last original member of the team and am familiar with how all the parts come together even if I am not technically proficient to alter the components. If things break, I know why they break, I know where to go and I know how to fix them. At the end of the day I keep the “machine” running and make sure other people’s jobs are as easy as possible by keeping a very tight and well managed process in effect.