You are here: Home / Guest Posts & Interviews / How to Sell Art on deviantArt.com

deviantART (often abbreviated as ‘dA’) has been around for 12 years, but it still isn’t recognized as a viable marketing strategy by many artists. Although it’s loaded with both resources and features, some aspects of the site bar it as a credible avenue for sales and promotion in the mainstream art world. Though the site is awash in crudely drawn science fiction and anime fan art, there’s much more to it than that—including a number of success stories. In a report from August of last year, Business Insider rated deviantART as the 13th largest social network on the internet. What’s more is that deviantART has so many tutorials in place and so much interaction with its community because it actively wants artists to succeed. So there has to be something to this, right? Let’s take a look through the good, through the bad and though the history of the whole thing.

In an article from January of last year, Entrepreneur.com’s Jennifer Wang wrote, “If it sounds like what other social networks have been doing for years, well, that’s because they have been doing it for years. But, in fact, deviantART was doing most of it first. It is one of the world’s first comprehensive online communities formed around user-generated content, and it was up and running three years before Myspace, four years before Flickr and Facebook–and a whole decade before Aaron Sorkin and Hollywood decreed it the age of The Social Network.”

That same Entrepreneur.com article states that dA has more than 14 million users, over 150,000 pieces of art are uploaded per day and each day sees 1.5 million comments posted. Those numbers don’t put dA anywhere close to the level of say, Facebook, but it’s is a social network purely for artists—it exists outside the realm of teenage drama, baby pictures and Farmville requests. Already-established industry titans like Adam Warren (Dirty Pair, Empowered), oil painter John Paul Thornton and photographer Lara Jade use the site just as avidly as hungry up-and-comers.

Artists can sell various prints of their works to their followers and casual customers alike. They can imbed their Twitter feeds and make blog posts for the benefit of their followers. The sheer amount of content hosted on the site is vast and varied—and so is the user base. Stunning watercolors and gorgeous pieces of animal photography sit right beside pencil drawings of characters from Naruto, simply because dA aims to be a social network for all artists.

In a USA Today article from 2011, dA co-founder Angelo Sotira said, “We have a larger global footprint … than all of the major museums in the world combined.”

If all of this is true, then why is deviantART shunned by so many artists? It’s probably one part content, one part reputation and one part name. There’s also the fact that anyone can upload something to the site and call it art, which (as all artists know), carries the sharpness of the proverbial double edged sword. In essence, your great mixed media piece about collective bargaining rights might be featured alongside a haphazard ballpoint pen sketch of Sonic the Hedgehog in a virtual gallery setting. It needs to be said, even when discussing the negative, that dA’s particular business model gives everyone a chance, which might mean the world to an independent artist who’s just getting started.

In reading through various deviantART member blogs on “how to succeed on dA,” I encountered the same suggestions again and again—draw anime characters, draw naked girls, draw fan art. The popularity of those things is completely out of proportion when compared to more traditional (and more experimental) types of art. People associate dA with anime and weird sex stuff. That keeps many “serious” artists at bay and prevents them from even looking at deviantART, let alone signing up for an account.

There’s also the issue of the name. “Deviant” doesn’t particularly have positive connotations in the weird and often seedy world of the internet. Sotira, says, again from the same USA Today article, that the name “deviants” was chosen because, “Artists do things a little bit differently, or they try to… [new artists are] changing how computers looked, how apps looked, and so they were deviating your desktop and deviating your life. As we became bigger and more mainstream, the name has a few challenges, but we stick to it because it’s still very relevant.” 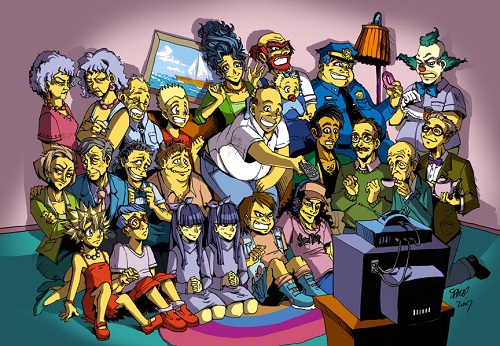 Other than the ease of uploading Crash Bandicoot fan art, there has to be some reason why so many people turn to deviantART to host their work and interact with other artists. The sheer volume of interaction and the possibilities therein are a big part of it. A good piece of art might be featured in several roundups, produce a deluge of tweets and earn hundreds of comments—all from members of the dA community. The previously mentioned comic book artist Adam Warren makes great use of deviantART to promote Empowered, using bonus material and behind the scenes insight to engage his fan base. He even gets to promote his convention appearances.

Adam Warren has been around for a lot longer than deviantART has, though. So how does it benefit artists who are still struggling? As both USA Today and Entrepreneur.com tell it, dA is a great platform for getting your work out there. It’s not unusual for design firms and large companies seeking artists to sift through deviantART to find good employment leads. The comic book publisher Udon, according to USA Today, would rather check out dA than read a resume or look through a portfolio. A dA account is clean, clear package that showcases what you do and what you’re about—which is something that employers appreciate.

The rule seems to be this:

deviantART gave Dan LuVisi the “in” he needed to have his work published by Heavy Metal, sculptor Alena Wooten got a job with Blue Sky Studios because of dA and Nina Matsumoto’s manga-style rendering of The Simpsons caught the eye of Matt Groening himself. LuVisi notes that, “If it wasn’t for deviantART, none of this would have happened.”

So, yes, deviantART has been around for 12 years and is positively full of anime fan art. It’s not a “hot new thing” and it’s certainly not accepted by some very credible artists. The thing is, though, that there are a ton of credible artists using the site and there are plenty of fledgling artists who will become credible putting their work on dA as well.

A lot of successful artists do leave Da behind, but their footprints are still there for others to follow. dA’s community wants artists to succeed, and it helps them by selling prints, hosting work, offering blog space and even offering marketing advice. What’s more, the site’s founders still take an active role in the community. Art is the only thing that matters at deviantART, and while it’s not as flashy or hip as some social networks, it’s got a boatload of success stories to back it up.

Have you used deviantArt in your career? Tell us about your experience in the comments!

« How to Create a Facebook Page for Your Art
Where Did You Put That? A Data Driven Approach To Your Art Career »