You are here: Home / Abundance / What Happened: How My Business Mistakes Led to Following My Bliss

This is the 4th and final post in a series on the evolution and re-evolution of an art business. To read the backstory, see parts 1, 2 and 3.
—-

Sometimes it seems that the only thing that gets me to make a change is a hearty wallop upside the head by the universe.

As I wrote in part 3 of this series, My Stupid Business Mistakes: 8 Lessons to Prevent You from Losing Money & Looking Dumb, at the end of 2009 I found myself in a full-fledged money panic. Much like an alchoholic waking up in the gutter, this proved to be a very effective change-inducing wallop. Here’s my story.

Winter is slow season for my business designing and selling ketubot (fine art Jewish marriage contracts) and wedding invitations, and a minor end-of-year money panic is normal for me, but last year was different. Because I’d spent a seriously stupid amount of money on seriously unwise marketing efforts, I didn’t have the savings I usually socked away earlier in the year. In fact, I had a whole bunch of debt. On a 0% interest credit card that was now just a couple of months away from costing me great gobs of interest charges every month.

In other words, major suckage.
Then, in early February, I made the biggest mistake of my business life, and truly hit bottom.
Here’s what happened:
Several clients had been in correspondence with me, but nobody was actually ordering. One couple was even planning to order two prints from me—a ketubah and a Quaker wedding certificate—but although they phoned and emailed with questions multiple times over a period of weeks, they were never quite ready to place the actual order.

When the bride left a message saying they were finally ready, I almost burst into song.
I got her on the phone, itching to close the deal–which now included the lucrative possibility of also creating their wedding invitations—only to find that she wanted to discuss everything with her fiance again before placing the order.
That’s when I totally blew it.

My mortgage payment was due, and with my money-panic blinders on, it felt absolutely critical that I get that damn credit card number now.
Good salesmen create a sense of urgency, right? (At least that’s what all the marketing books I’d been reading said.) So although it made me feel icky and used-car-salesman-y, I offered to include a special upgrade package for free… if she was ready to place the order right now.
The problem with creating a sense of urgency is that, if not done right, it creates a sense of mistrust. Sure enough, she quickly got off the phone, and later that night sent an email saying, “Our conversation earlier made me uncomfortable, and we’ve decided to go a lower-pressure route.”
Wallop.

That’s when I pretty much lost it. We’re talking all-out hysterics. Honestly, I’ve never felt so low or desperate in my life. I had needed that sale, and I’d blown it.

Kick ’em when they’re down

Just a week later things went from really bad to way worse when my boyfriend announced out of the blue that he was moving out, taking his monthly contribution to the rent with him.

Up the wrong ladder

His parting gift was to forward a link to a blog post profiling another ketubah artist, who had just quit her day job and seemed to be shooting forward in her business. I was fascinated by my reaction: on the one hand, I was burning with envy that this other artist seemed to be achieving so much success. On the other hand, I realized that I actually already had what she had (ie, my own, full-time ketubah business, which, although I was in debt, was actually a pretty solid little business) and I wasn’t happy.

The more I thought about it, the more I realized that my unhappiness wasn’t just because I was in debt and my business was not growing as much as I wanted. In fact, I realized that this other ketubah artist’s dream, which had once been my dream, was not my dream anymore. To paraphrase Steven Covey, author of The 7 Habits of Highly Effective People, I’d climbed the ladder of.. if not success, at least making a living as an artist, only to find it was leaning against the wrong wall.

I wanted more… but what?
For a long time I’d felt frustrated that although I made my living from my art, I didn’t spend much time actually creating art. I’d channeled some of that frustration into a side career as a jazz singer/songwriter, but something was still amiss. Now that everything was falling apart around me I finally saw clearly what I’d known in a vague way for years: this wasn’t the life I wanted.

Now in addition to being money strapped I had the additional problem of feeling utterly lost. I knew I wanted to spend more time creating, sure. Art that I felt like making. But I couldn’t envision what that might look like, or how I might make a living at it.

As it happens, the profile of the other ketubah artist was on Chris Guillebeau’s amazing blog The Art of Nonconformity. I’d never heard of Chris or his blog, but as I poked around the site I realized that here was a person doing exactly what I, in my heart of hearts, wanted to do, but hadn’t believed was possible: living the life he really wanted, doing things he was passionate about, and getting paid for it.

Suddenly, simply from having a model of possibility, a whole new vision opened up of how my life could be. I determined that I was going to change my own life around to follow my true passions and not just settle for second best, and I set about figuring out how to do that.

Before this point I had only been vaguely aware of the world of blogs. Now I began digging around, reading like mad, signing up for newsletters. It seemed a lot of folks were making good livings from their blogs, from their creative stuff, and I was committed to learning from them so I could do the same. My goal? Two parts:

1) To find the convergence between what I was passionate about (not just what I liked) and what other people would be willing to pay for.

2) To find my “tribe” – the audience who would resonate with (and buy) what I wanted to create.


Here, in somewhat chronological order, are some of the steps I took:

• I started my own blog, Living A Creative Life, to chart my journey, and began writing like mad. I found that the very act of writing fed my creative hunger, and got me back in touch with that part of my soul. And since I’d been “trying” to be a writer 15 years ago when I accidentally ended up as an artist (see part 1), I felt like I’d come full circle.

• I wrestled with my identity: I’ve always had lots of passions, and suddenly “ketubah artist,” which had never been a large-enough title to fit comfortably to begin with, started to really chafe. My friends and family had been calling me a Renaissance Woman for years, and I experimented with using that as my official job title, even printing up business cards. I figured out my real passion was being my fully creative self (in all of my creative expressions), and helping others to do the same.

Finding new ways to be creative… and make money!

Meanwhile, rather than throwing 100% of myself at a business I liked but wasn’t passionate about (and was honestly feeling pretty burned out on), I decided instead to work on developing new streams of income:
• I started teaching calligraphy again, at my dining room table–something I loved, but hadn’t done much of for years, since I’d been so focused on the ketubah business.

• I started copywriting, and found it to be a creative challenge I actually really enjoyed.
• I started doing WordPress website design and offering tutorials to my technophobic clients on how to update their own sites. In the process I re-discovered how much I love working with people, inspiring them and helping them feel successful.

• I started developing an online course, the Thriving Artists Project, to inspire creatives like me to go after their dreams, and I began doing recorded interviews with artists and creatives who are making a living from their passion.

• Best of all, I started actually making the time to create in my studio again! I began painting with acrylic on canvas, a medium I’d never used before. And though I didn’t (and still don’t) always like what I created, I love the process of creating (I call it “playing in the sandbox”), which is what matters. (Plus, as I mentioned in part 1 in this series, just because I don’t like something I create doesn’t mean someone else won’t!)

Not only did expanding into new areas help my bottom line, but I was surprised to discover that I wasn’t feeling so burned out with my wedding art and design business. Allowing myself to inhabit more identities than just “ketubah artist” liberated me, and the business I’d fantasied about quitting became, if not my primary passion, at least something I could enjoy again.

The Law of Attraction?

Meanwhile, the universe seemed to conspire to reward me for my life-changing efforts. After about six months of regular blogging, out of the blue I was offered an opportunity to partner on a new site all about creativity, 365 Days of Genius (one of a whole network of 365 Days of… sites in development), scheduled to launch after Christmas this year.

It couldn’t have come at a more perfect time. As blogging has become a bigger and bigger part of my life, I was wanting some kind of mentorship beyond the online courses I bought. As part of the 365 Days of… “Empire,” I have the ongoing support of an experienced partner, plus an entire community of other partners, each working on our own sites, and helping each other succeed. And since “wedding season” has slowed down once again, I have more time to throw at a huge new project. (Good thing, because this may be the biggest project I’ve ever taken on!)

Eight months after hitting bottom, I’m happier with my life than I’ve ever been. I’m living more in alignment with my goals (to regularly exercise my creativity through my visual art, music and writing, and to help others follow their passions), and I’m on track to grow a completely different business model, in which I’m following my passions, constantly creating, and thriving financially.
I’ll admit it would have been nice if I could have gotten here without getting walloped upside the head by the universe, but apparently that’s what it took. And although I really wouldn’t want to go through that kind of walloping again, now that I’m on the other side, I can say it was totally worth it.
Money’s still tighter than I’d like right now, but I love my life. How many people can honestly say that?

In closing, thanks for reading (your comments have meant a lot to me, please keep them coming!), and I’ll leave you with the tagline for my blog, which is both a lesson and a directive. I hope you’ll take it to heart. 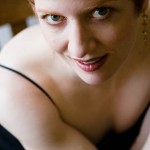 Melissa DinwiddieAs an artist/designer, freelance writer, jazz singer/songwriter, and teacher/coach, Melissa Dinwiddie likes to call herself a Multi-Passionate Creative ARTrepreneur. She combines her varied passions on her blog, Living A Creative Life. Melissa’s current project, the Thriving Artists Project, is an online course for anyone who aspires to turn their art or creative thing into a full-time career.