You are here: Home / Uncategorized / Member of the Week- Will Enns: Lifting Spirits with Paintings of Spirits

This week’s featured Association member is Will Enns.

TAA: How would you describe your art to your ideal collector?
Will: My art is not unusual; It’s unique. My ideas are unique. The result is unique. If you want vanilla, look elsewhere. My art lifts people’s spirits. I see it every day. People look at my art, they smile, they laugh, they start talking.

TAA: What motivates you during slow seasons?
Will: I do this full time. If I’m not working on something, It’s time to die.
This IS the slow season, I am finalizing my kid’s book “The Crazy Zoo Tangle.” I wrote it, and have just finished the illustrations. Next, there is the promotion. When that’s done, there are a bunch more wine paintings in the pipeline. By then it’s fall, and time to replenish all the venues that sell my art and funnel buyers to my studio, which is where most of the sales happen. There is no slow time, only ad infinitum. I need a rest from the slow season.

TAA: How did you settle on your current way of working? (How did you narrow your focus?)
Will: I painted a bunch subjects such as cars, landscape, old world, fashion, etc., in an attempt to identify what sells. Wine art sells where I live, so wine art is what I paint the most of.

TAA: What was your greatest success from the past year?
Will: Learning the up-sell. Fully 50% of my buyers spend another 1-200 if I make them an offer on a second print at a discount. 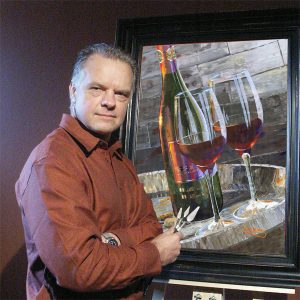 Will Enns once a drywall contractor. Later, he bought a motel with his wife Jennifer. While inn-keeping provides ample material for acerbic commentary, it also leaves free time during the long winters, so in 2001, Will began drawing seriously. He soon came under the tutelage of Ben Crane, a nationally published illustrator. Within a year, he was selling story illustrations to several magazines, and by 2003, he was making cover art for Cars Magazine (then known as Canadian Technician.) Will has worked in watercolor and digital media, but prefers acrylics for their forgiving nature and durability. His work has been prominently featured on the cover of Okanagan Life magazine, on the Big Screen, Wine Labels, and in other venues that fail to spring to mind. Will lives and paint in Summerland BC, where Jennifer encourages his various and frequently ridiculous endeavors, when not too busy chortling over them. You can see more of his work at his website, http://willenns.com