You are here: Home / Abundance / How to Manage Your Money on a Variable Income

The artists of whom the Bureau of Labour Statistics speaks are made up of all kinds of artists: some work for big companies, some are self-employed (about a 50/50 split), some draw cartoons, and some illustrate medical textbooks.

I think that, as an artist myself (although the performing kind…not the ‘make really beautiful stuff you can buy in a gallery’ kind), I’m pretty programmed to hate the word ‘average.’ I’m also programmed to not really like the idea of stats because “I’m not a stat I’m a beautiful flower that will succeed where everyone else fails, dammit!”

Or, come to think of it…it doesn’t look like those in that stats pool are failing at all since the average salary is $44,400 a year. I’m not saying that’s an insane amount of money, but it’s pretty far away from the ‘starving artist’ label that so many of us embrace without question.

So what’s the truth? Are we starving or are many of us doing alright?

I can’t speak for everyone (since the ‘average artist’ is actually only something that exists in Bureau of Labour Statistic Reports), but I know that it’s possible to make $44,000 as a self-employed artist and still feel like you’re barely scraping by.  It’s possible because those feelings are not only about the amount of money you make, they’re about how that money comes in, how that money is generated, and how you use it.

How is your money coming in? Variable income can make you crazy.

I’ve had years when I’ve made almost nothing for six months, and then made $40,000 or more in the last half of the year. On my tax documents I’ll look like the average artist, but for the first six months I was doing the rice and beans cha cha.

If you’re one of the nearly 50-percent of fine artists that identifies as self-employed, there’s a good chance that your income doesn’t come in nice, consistent amounts every week. So even if you’re making a decent living, you can go for long stretches feeling like you’re barely scraping by.

Variable income can also leave you with a very bad idea of how much money is actually coming in.

I used to live in two different modes: life with money, and life without money.

At the end of the year I couldn’t tell you how much money I had made because I wasn’t really keeping track.

Variable income may seem like an unjumpable hurdle (honestly, every hurdle seems unjumpable to me…I have no idea how they do it). But it’s not.

For the past year I’ve been paying myself a salary. The process is simple to set up, and makes an insane amount of difference.

What it allows me to do is commit to paying myself a set salary that covers my basic personal costs every month. In short, I don’t starve anymore, even when I’m not working.

How? Even simpler. In the good months, I pay into a salary buffer. That money sits there for use in the months when I’m not making enough. In short, my rich months get poorer, and my poor months get richer. The result is I get to feel a lot more like the average artist that I am.

If you want to know more about how to pay yourself a salary (and slay the variable income dragon) go HERE for a step-by-step guide.

It costs money to make money! Sort out your actual take home pay.

$44,400 sounds like a decent amount of money. But the truth is that if you’re a self-employed artist that’s not actually what you personally are making.  A ton of that money is going back into your business, allowing you to make more art, which you will hopefully sell for more money.

No matter how modest your business is, there are costs that you have that non-freelancers don’t. This includes materials, training, and marketing.

After all my business costs, I take home about 60-percent of my yearly earnings.

Know the difference between your yearly earnings and your take home pay.

The Bureau of Labour Statistics may not care about how much you actually get to spend on your life, but you should.

Knowing how much you actually take home after business costs are factored in is a really powerful piece of information. Without it, even the most disciplined money manager is working with the wrong information.

Money 101: It’s not the size of the salary that matters, it’s how you use it.

Yes. The amount of money that you make matters. More money gives you more options. But it’s definitely not the only thing that counts in your financial health.

There are tons of people who are just scraping by on on $100,000 a year. They have huge expenses that are eating up that cash before it can do anything.

At a certain point you’re making a choice to starve.

Five years ago, I was making a regular salary working as an artist. It wasn’t a lot of money, but it was more than I make on average now. But it never seemed like it was enough. I was in full ‘when you have money, spend money’ mode, and my expenses were eating up my entire paycheck.

Now, I do so much more than I could do before because I’ve lowered my expenses and really tried to make my money as efficient as possible.

How to do more with less.

You’re gonna hate it, because you already know the answer.

It’s the tool that was made for situations like these. It’s the plan that lets you take every single dollar that comes through your hands and work magic with it.

If you’re looking for a place to start, I’m a huge fan of YNAB (You Need a Budget). The software works great for artists (self-employed or not), and their four-rule budget philosophy really changed the way I think about money.

It doesn’t matter if you’re average or not.

It doesn’t even matter if you think the labor stats are completely bogus.

What matters is that if you’re having a hard time, if you feel like a starving artist, there are financial tools that can help you do more with less, manage variable income, and run your business better.

These tools aren’t just for billionaires, they’re for people with limited resources and big dreams.

Yes, the challenges are real. But the tools are just as real.

What if we redefined what it meant to be an ‘average’ artist? What if we moved away from the old ‘starving artist’ cliche? What if the average artist was more stable and more free (no matter what income they made)? What kind of art would we create?

I can honestly tell you…that’s the kind of average that gets me pretty excited. 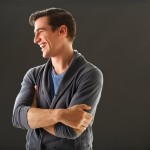 Today’s Guest Blogger: Through his work as a freelance singer, Chris fell into a passion for personal finance and is currently on the path to achieving a certification in financial planning. He is also the founder and writer of the blog From Rags to Reasonable: Personal Finance for Artists and Storytellers, which has been featured in The Globe and Mail, the Huffington Post, and on numerous other finance blogs. Chris is passionate about equipping artists with the financial tools that will empower them to make art, no matter what their income.