You are here: Home / Blogging for Artists / The Miracle in July

This is one of the interviews that I am most excited about.  Michelle (AKA @mediachick) is a writer, digital content producer, and (self described) social media fan.  Her new project, The Miracle in July, is one part story telling, one part media experiment, and one part reverse engineering of the publishing industry.  Sound complicated?  Read more below, then check out her website iHeartMedia.com. 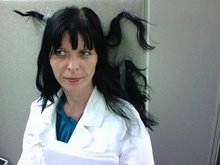 Tell us about your art. What’s your medium, how long you’ve been doing it? Are you any sort of artist other than a writer?

I’m a multimedia producer, which is a fancy way of saying “storyteller”. I’m also a online community manager, which is a fancy way of saying I’m an “evangelist” who uses social media applications to bring people together around a central topic. My art is in the choosing of appropriate media for sharing things like information, concepts, true events, and of course, fiction. It’s like sculpting or painting to convey ideas, but instead of clay or paint, I use digital elements, words, pictures and sounds.

The Miracle in July, my current multimedia project, is a study in reverse-engineered book publishing. Nearly 2 years ago I decided I wanted get my short stories published in a book, and then I wanted to write my life story. I quickly learned that even if I secured a literary agent and found a publisher it would be 3-5 years before I’d ever see my story collection on a bookstore shelf. And what I *really* wanted to do was publish my life story, so I decided to concentrate on that story first.

The story is told in three acts, each act made up of several segments, and I use blogging software. Segments are embedded with media — music, photos, sound effects, video — to help the reader submerge themselves in the experience. Each week a new segment is posted, and I use social networking sites like Twitter and Facebook to get the word out. I’m relying on what I’ve learned as a storyteller and community manager to build a community of readers.

At the end of each act I will produce an edited version of the act’s segments as a downloadable eBook.The project’s end will be a hardback book, which I will either self-publish using a service like lulu.com or let someone else publish it for me if I attract the attention of a next-generation, visionary publisher. And because the story will exist online and offline, and offline the multimedia links are useless, I take great care in making sure the content, the story, translates well in each format.

Where did you study or get your training?

I am a graduate of Portland Community College’s Multimedia Producer program, a truly intense program where as a full-time student often found myself taking 13-21 credits per term on everything from video to scriptwriting to interactive CD gaming. I already had several years experience in public cable television programming and sporting event video production. There’s jewelry making in my past, too, and I’ve always been a writer. My whole life I’ve been concerned with capturing the essence of a story, finding that train of thought that collectively most people would relate to and enjoy.

Who was your inspiration when you got started writing? 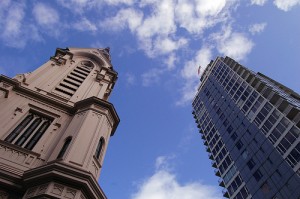 My best friend since high school, Sarah Holloway (@saydawn) had been by my most die hard, ardent fan, hands down. She has always wanted me to write professionally, but until now I didn’t know how to make it happen the way I wanted it to. And when the story layout came to me, how it’s an online story that eventually becomes a book, and how it’s in three acts and encourages online readers to help introduce more readers to it through social media, I knew it was time to put on my writer’s hat and make a serious effort at realizing my dream.

What is your ‘day job,’ or complimentary career? Give a few details about your day to day activities.

During the day as Director of Media Production at a professional career school I produce textbooks (formatting, editing) and online coursework (interactive games, video). About six months ago I took on the additional responsibilities of Community Manager, so now I help make the company’s online presence search engine friendly, administrate and edit four blogs, and participate in online social networks on behalf of the company. I also do the occasional Webinar for students who want some insight into using social media tools to promote their new business.

How did you get into this job?

I started with the company as Instructor Coordinator, and at the time we had no online courses so I spent a lot of time scheduling traditional classroom courses and finding people to teach them. I was hired because I was in the middle of the PCC Multimedia Producer program and the company was in the middle of building a Learning Management System, which is what schools use to teach classes online. (For instance, many colleges use WebCT as an LMS to hold their online classes.)

When the company’s LMS was launched I moved into the role of online course content producer. After 8 years with the company I am now Director of Media Production.

How does this job compliment your art and other creative endeavors?

Every day I find complimentary information I can use. I wrote a blog post about that, called Social media learning: for business AND pleasure. I see no separation between the ah-ha moments I have at work and the ones I have during the act of creating for The Miracle in July.

What is one thing about your current career that you didn’t anticipate when you were younger? How did your career evolve in ways you didn’t expect?

I didn’t realize how hard it would be to sit in a cubicle 40 hours a week. I remember as a new worker being exhausted just from sitting in an office chair in front of a computer all day. I would go home, fall asleep, and wake up unrefreshed to do it all over again. The human body is not made to conform to the 8-5 working convention.

And this is naive of me, but I didn’t expect bad managers. It still truly surprises me that promotions work the way they do: people rising through the ranks because they’re good at what they do, until they reach a level where they’re not so good. And there they stay, not good at their job. This fact has made it hard for my career to evolve at all, and takes some getting used to.

If you could give other artists advice about money or getting started in their career, what would you say?

I say “follow your bliss” but also take a very hard, critical look at your work and don’t depend on the accolades of your loved ones. They love you, after all, and are biased. The work, the content, must be good. It must be beneficial or inspiring or monumentally ambitious. If it’s not great, then the money will be hard to come by. But if it’s not great and instead returns pleasure from the act of creating itself, then please keep creating. Because it is beneficial to you, keep at it. But get a day job that allows you to support yourself.

What does the term ‘selling out’ mean to you? Have you ever been accused of selling out?

I think people who accuse others of selling out fail to understand the natural, organic practice of creativity and what happens during the lifetime of creative pieces. History is cyclical and true innovation is a rare, fickle beast. There is no original content, not really. So, how is anyone “selling out”? An artist is successful when his version of what’s already been done is recognized for its impact on those who experience it or for its monetary value.
♥ mediaChick